Rolled Throughput Yield (RTY): The probability that the process produces a good “unit” the first time through.

You can view these videos through the listed links for First Time Yield and Rolled Throughput Yield.

Of course, using the example in the video for the three steps in series, we see that

As described, the RTY calculation is simple if all the process steps are in series and rework is only done once in a given process step.

Suppose however that  rework is done not once but say twice in a process step? And what if some of the process steps are in parallel?

We will address both questions with examples.

First: Rework is done more than once 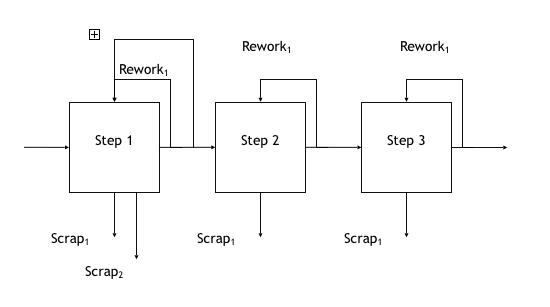 We’ll look at the “true” rolled throughput yield focusing on Step 1 for the above example.

We use a subscript to indicate whether scrap or rework is done during the first pass or a second pass, etc.

The above is the case that most material simplifies to, only one pass through.

But if we’re really trying to get at the hidden factory and look at the amount of waste, we have to track every pass through a step and take into account whether the results were good or bad.

Let’s assume there was an only second pass through. We could generalize to as many as there are although in practice, we recommend that after a given part is reworked a certain number of times, it should be scrapped.

The true throughput yield for Step 1 is therefore 80 percent.

One would then continue as usual to compute the system Rolled Throughput Yield.

Next: Some process steps are in parallel

If  we know the individual RTYs for any operation, and we have a combination of series and parallel operations, how do we calculate the RTYoverall for the system?

First, we need some assumptions for the approach we describe.

If we know the number of units being processed and the fraction of them going through the different parallel operations, then the RTY for the parallel “block” as a whole is the weighted average of the individual RTYs making up the block.

3)  All rework is done by the same operation that produced the defect.

Let us work an example where we know the number of units, how they split among the parallel steps, and the amount of scrap and rework. 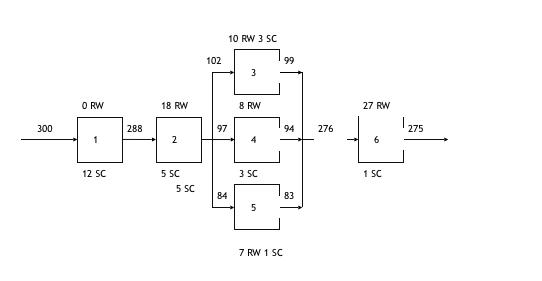 We started with 300 units and finished with 275 having scrapped 25 units. However, much rework was done.

We now need to compute the overall RTYSystem

Ops 1, 2, and 6 are in series, and the resultant RTY is computed in the usual way through multiplication.

Ops 3, 4, and 5 are in parallel. As a result, the RTY3, 4, 5 = the weighted average of the individual YTPs weighted by the fraction of units passing through those operations.

However, if we use the original fractions for the individual YTPs, we see the following:

But using the obvious cancellation, we have

But this is simply, taking the block as a whole,

Now we can calculate RTYSystem.

What if all we have are the individual YTPs for every operation without the original scrap and rework numbers?  How then do we compute the RTY for a parallel block?

If we assumed that the products or services going in were equally split among the operations in the parallel block, which might not be the case, then we could simply average the individual YTPs to get the RTYBlock.

However, since we don’t know that, a better approach is to take the geometric mean of the individual YTPs.

Recall that the geometric mean is simply the nth root of a product of n numbers.

In the above example, then,

Of course, in more general cases with series and parallel loops, rework, repair, scrap, etc. a simulation model would probably be required to get a good estimate. This is what Pyzdek recommends – Pzydek, T., The Six Sigma Handbook, McGraw Hill,pp. 488-489, 2003.