Why should a project be required for Green Belt or Black Belt certification?

The short answer is because a project demonstrates that the Belt can deliver true organizational impact based on their training.

While exams assess the trainee’s grasp of a body of knowledge typically through multiple choice and/or true-false questions, only a real world project within the workplace or as a volunteer can determine the student's ability to deliver satisfactory results that would earn the new belt designation (e.g. an improved process at the level in question that provides a soft or hard money savings). Many employers indicate such a preference for demonstrated real world examples. This is why a project should be required for Green Belt or Black Belt certification.

Note: The short paper that follows is based on the work of Donald L. Kirkpatrick as discussed in his 1994 first edition, Evaluating Training Programs: The Four Levels.

From the back dust cover to the first edition:

“In 1959 Donald Kirkpatrick developed a four-level model for evaluating training programs. The "Kirkpatrick Model" has since become the most widely used approach to training evaluation in the corporate, government, and academic worlds.”

Since then a third edition was published in 2006 and co-authored with his son, James D. Kirkpatrick. 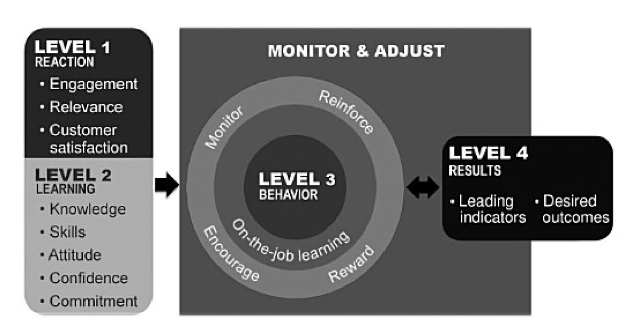 Here are the four levels as described by Donald Kirkpatrick in Chapter 3 of his first edition.

While all levels are important, it is Level 4 – Results that adheres to project-based accreditation.

The following gives a short overview of the four levels using Kirkpatrick’s definitions.

Reaction Level: “… evaluation on this level measures how those who participate in the program react to it.”

This is the so-called “smile sheet” immediately used by participants to evaluate their training experience.

Learning Level: “Learning can be defined as the extent to which participants change attitudes, improve knowledge, and/or increase skill as a result of attending the program.”

Behavior Level: “Behavior can be defined as the extent to which change in behavior has occurred because the participant attended the training program.”

Results Level: “Results can be defined as the final results that occurred because the participants attended the training program. The final results can include increased production and/or severity of accidents, increased sales, reduced turnover, and higher profits and return on investment.”

Results can only be measured from a participant’s behavior applied to a project in the workplace!

As Kirkpatrick makes clear, on page 21, first edition, “None of the levels should be bypassed simply to get to the level that the trainer considers most important.”

The “smile sheet” and the exam measure reaction and learning respectively. But in our opinion, the project best measures behavior and results.